Transgender men and gender non-conforming people in our region commonly delay or never seek preventive health care, Susan G. Komen Puget Sound announced today in a release of findings from its research on LGBTQ experiences with providers. Based on the findings, Komen Puget Sound and a coalition of partners have begun to develop an LGBTQ breast health toolkit for health care providers and the LGBTQ community. 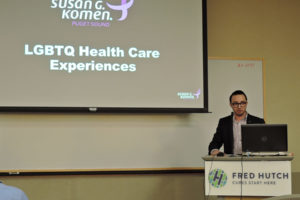 Fifty-three percent of the LGBTQ community members said they always go to a provider who specializes in LGBTQ health or is sensitive to LGBTQ identities. Still, only 29% rate their provider as excellent in their ability to understand patients’ gender identities and/or sexual orientation.