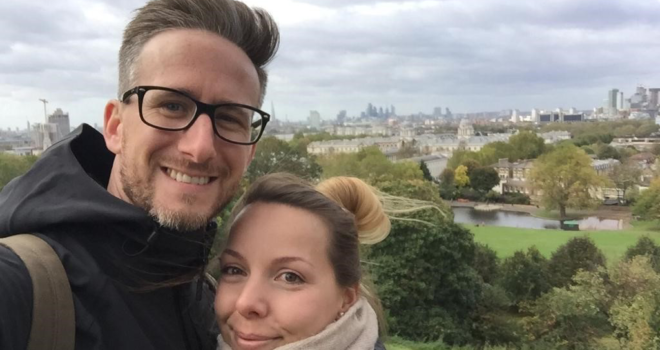 Kirsty and Nick have a long history of trying new things; from the extensive traveling they did early in their relationship to Nick’s taking a job with Expedia in Seattle, they are no strangers to taking a chance! They both have a love of travel and clearly an adventurous spirit, which made the opportunity to move from London to Seattle very appealing to the duo.

Immigrating to the US, even temporarily, is not without its challenges. Here on an “L” visa, Kirsty wasn’t able to take a paying position until her work visa extension came through, which took about 6 months. Not about to sit on her hands for six months, Kirsty set about finding a place to connect with the community. A visit to the Volunteer Match web site yielded several possibilities, including Komen Puget Sound. Reading about the Komen Puget Sound mission to address barriers to care for at-risk communities and provide services here in the local community she immediately felt a link with her work in the public health sector back in London.

After volunteering at Komen a few times, Kirsty joined the MORE THAN PINK Walk volunteer committee overseeing the registration process. Her first foray back into a team environment, she felt completely embraced by the full-time team as well as the volunteer committee. Treated like a full-time team member, she felt valued for her expertise. “I was so taken aback by the fact that everyone was so invested and excited to be a part of the Walk,” said Kirsty. 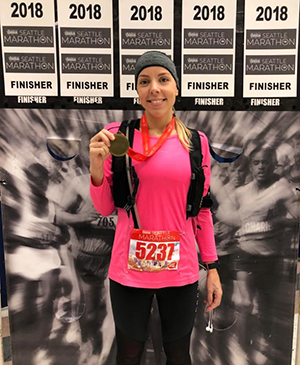 After the Walk ended, Kirsty was instrumental in filling the hole left by Dawn, our volunteer manager, during her medical leave. Kirsty managed volunteers and event details for several successful events including the NW Metastatic Breast Cancer Conference and the Survivor Celebration during her time serving as the volunteer manager.

Kirsty’s volunteerism has taken hold of her husband Nick who attended a Seattle U soccer game on the 26th supporting the team’s “Kick for the Cure” event for breast cancer awareness month. “Volunteering at the game opened his eyes to the wider world and the opportunity to make a difference outside the corporate 9 to 5,” said Kirsty.

Kirsty and Nick are beginning their next grand adventure: a new baby coming early next year. We wish them all the best and can’t wait to meet their new little volunteer!